Contagion, Clinging and Closeness to God: A Hebrew Root For Today

Israeli Prime Minister Netanyahu has emphasized that, given the burgeoning pandemic, everyone needs to do their utmost not to להדביק lehadbik, and not to להידבק lehidabek. Roughly speaking, regarding the disease: if you got it, don't give it, and if you don't got it – don't get it.

The Hebrew terms he used come from the root three-letter root ד-ב-ק, d-b/v-k, which is used to describe viruses and other catchy things: a machalah medabeket is a "contagious disease."

Yet while words like "contagion" and "infection" are pretty negative (contagious enthusiasm and infectious laughter notwithstanding) – this Hebrew root gives us both of these disease words, as well as much more positive forms of clinginess.

The root first appears in Genesis 2:24 to describe the ideal relationship between a man and his spouse: “Hence a man leaves his father and mother ודבק vedavak beishto, and clings to his wife, so that they become one flesh.” This language would be quite apt for any dyadic coupling, for it is the same word that is used to describe how Ruth behaved toward Naomi: “ve-Rut דבקה davka bah, and Ruth clung to her.” (Ruth 1:14)

On the other hand, this is also said of Shechem, son of Hamor, in Genesis 34, in his relationship with Dinah, daughter of Jacob. Shechem wasn’t the suavest courtier: according to the story, he bedded Dinah against her will ("he lay with her by force"), in a scene that will forever be known as the rape of Dinah. But, however it began, he quickly fell for her. The text says not only that he loved her, but even ותדבק vatidbak nafsho, that “his soul clung to her.” (Whether she ever reciprocated - or whether it was an actual rape and not just described as such to negate Dinah’s possible role in the matter, and to justify the honor killings perpetrated later, are all fertile fodder for the midrashic imagination.)

In the same way that people can cling to each other, a person can cleave to God: “You must revere the LORD your God… ubo תדבק tidbak, to Him shall you hold fast."(Deut 10:20) And also in another verse: “Ve'atem הדבקים hadveikim badonai, while you, who held fast to the LORD your God, are all alive today.” (Deut 4:4)

The idea of a very physical clinging to God in Kabbalah and Hassidism became an entire theology known as דביקות deveikut, striving for a transcendent spiritual closeness with God, unio mystica with the divine. Another kabbaslitic use of this word, in a different vein entirely, is when an evil spirit clings to a person, a sort of demonic possession, known as a דיבוק dybbuk, made popular in a play by S. Ansky in the early 20th century.

Also on the negative side is the Psalm 137 (aka, the one by Bob Marley): “By the rivers of Babylon, there we sat, sat and wept, as we thought of Zion…If I forget you, O Jerusalem, let my right hand wither; תדבק tidbak leshoni let my tongue stick to my palate if I cease to think of you.” (vv.1,5-6)

In Modern Hebrew, as with many spiritually rich traditional terms, the root has been secularized into everyday use. דבק Devek is “glue,” דביק davik is “sticky,” and מדבקה madbeka is a “sticker.”

Finally, the most fraught form of the root – certainly today – is the word "contagious," מדבק midabek. And while this sounds like it should be a modern coinage, it's right there in Deut. 28: 21, in the curses for disobedience: "The Lord will make pestilence cling to you…", yadbek becha… et hadever ידבק בך את הדבר  - which is the word used to translate Camus' The Plague.

All evidence shows that clinging to one another in the good ways (social support and solidarity) is the best way to avoid a contemporary plague and pestilence of potentially Biblical proportions.

And don't forget to wash your hands! 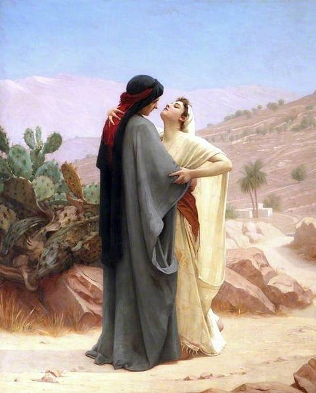