Inside Intermarriage: Why One Partner Chose to Maintain a Christian Identity

Inside Intermarriage is Jim Keen’s personal journey as the Christian partner in an interfaith marriage. From deciding to have a Jewish wedding, to raising his children Jewish, to learning about a new culture while maintaining his own religious identity, Keen candidly explores the challenges and opportunities and offers comfort and strategies to couples starting down a similar road.

The following is excerpted from Chapter 20 of the revised edition of Inside Intermarriage, due out later this year: 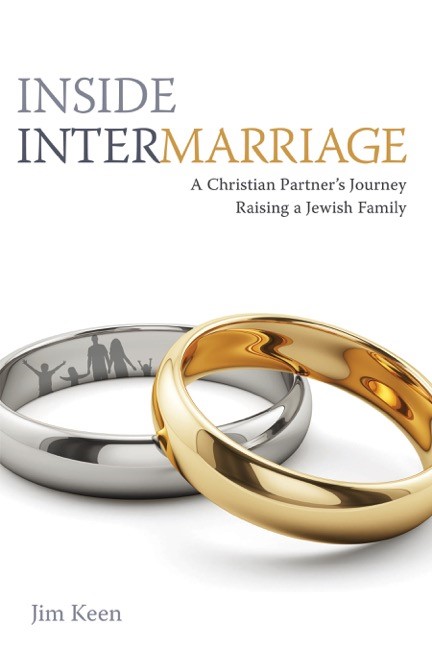 ...There had been times when I’d wondered if I’d made the right choice. If I believed in my faith so much, how could I allow my own children not to believe in it? Would it be better if I converted to Judaism? Before the kids were born, I thought that there was a chance I would feel like a black sheep in my own family.

...As far as my own children not believing that Jesus was the Messiah, well, I had never been one to say which religion in this world was the correct one. While my faith has always been strong, my daughters and I still loved the same God, and that was good enough for me. The important factor here was that Bonnie and I were raising them in a faith that had wonderful traditions and taught excellent values. The last thing we wanted was for them to grow up without any religion at all.

... I have never been foolish enough to believe that everyone would agree with me on this issue. It is a tough one, and people handle it in different ways.

In fact, people often ask me why I have not converted to Judaism as one way to address the issue of our mixed-religion family. When Bonnie and I were dating and trying to figure out how we would make our interfaith marriage work, I looked at every option. It didn’t take me long, however, to know that I would not convert. Conversion would have been convenient, because it would have meant that my wife, kids, and I could all practice the same religion. But convenience is not why people should convert. It has to feel truly right. I don’t feel that I can leave my religion. Is letting my parents down a factor? Oh, sure. But, ultimately both my parents and I know that it would be my decision to make.

I am a Protestant. I grew up this way, and my faith is as strong as ever. It’s who I am. But it’s not all I am. The Keen family mostly traces its roots back to, among other places, Clan Gunn of the Highlands of Scotland. I like to celebrate my ancestral background, even if it’s more for fun than anything else. I believe that every American has a heritage and should be proud of it. That’s what makes our country great. It’s what unifies us—we’re all from someplace else. I love teaching my girls about the places where their ancestors were born. I think it’s wonderful that they learn about these people from Scotland, Ireland, Sweden, Germany, Lithuania, Russia, and Poland. What a crew. And now, I am proud to say, there are some Keens who happen to be Jewish. I love it.