On Schlemiels, Friendship, and Hanukkah: Q & A with Author Eric Kimmel 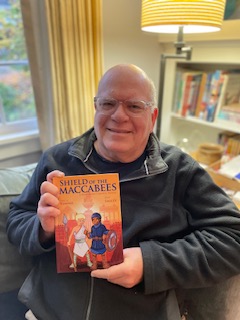 Over a long and distinguished career, Eric Kimmel has written all kinds of books for children. His latest, Shield of the Maccabees, marks a new first for him - a graphic novel.

The new story, illustrated by Dov Smiley, is set in ancient Judea just before the very first Hanukkah and follows two friends - one Jewish and one Greek - as war comes to their land.

In an interview, Eric Kimmel tells us more.

Why make a graphic novel now?

Comic books were not considered literature when I was a kid. I hadn’t read any comics since junior high. My agent suggested I learn more about this format since it's now so popular. My friend Michelle McCann took me to Powell’s Bookstore in Portland and loaded me up with graphic novels to read. I was impressed. Some were so-so and predictible. Others could hold their own with literature in any genre. I was hooked.

Shield of the Maccabees is a nuanced telling of how Hanukkah came to be. What inspired this angle of friendship during a time of war?

The original story comes from the American Civil War. Two friends from Kentucky, a border state, find themselves fighting on opposite sides. They meet on the battlefield and recognize each other. Their friendship prevails over the lines of battle. How can they help each other get to safety? They come up with the idea of taking each other prisoner. Depending on whether they encounter Union or Confederate soldiers, each will pretend to be the other’s prisoner. They keep this up until they get to a safe place where they can part and rejoin their respective armies. Another inspiring idea came from Erich Maria Remarque’s novel of World War I, All Quiet On The Western Front, where the main character, a German soldier, kills a French soldier. Sadly, he realizes that the madness of war made them enemies. Had they met at another time, another place, they might have become friends and go to have a drink together in a cafe. Does this have implications beyond Hanukkah? I believe so. 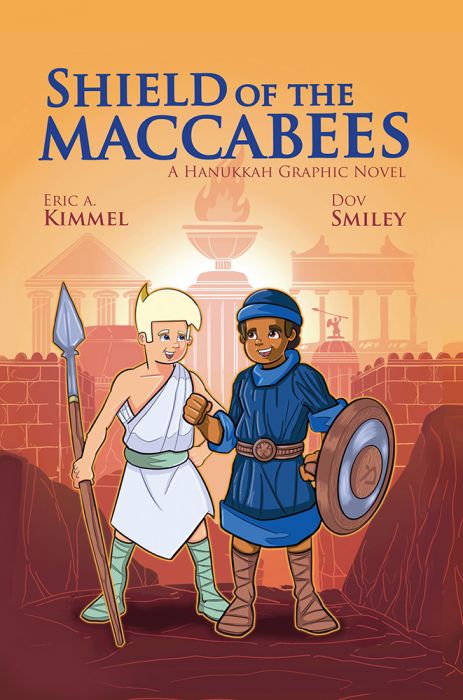 What kind of research did you do to evoke the ancient time?

Ever since I was a kid I’ve always been fascinated by the Hasmonean period. There’s far more to it than the Maccabees and most is not very pleasant. After the victory, the Hasmoneans conducted themselves like all the other regional despots. They engaged in petty wars, feuded with each other, and finally invited the Romans in to help them overcome their factional rivals. The Romans stayed and ultimately shoved the Hasmoneans aside.

Back in my college days I had a wonderful professor of philosophy, Dr. George Clark, who first introduced me to Greek philosophy, logic, and Plato’s Crito, where the Myth of the Cave appears. He didn’t lecture. He asked questions that forced you to examine your ideas and beliefs. He taught me how to think. The character Master Appolonius is based on Dr. Clark.

But Shield of the Maccabees is fiction, not history. Dov and I bent actual history in several ways to establish the characters and their story. For example, only the most sophisticated, Hellenized Jews would have attended a Greek school or gymnasium. Both would have been unwelcoming and even hostile places for Jewish people. My model for Jason and Jonathan’s home town is Caesarea, which was not built until much later.

What is factual is that the Maccabean Revolt was a savage conflict pitting trained professional armies against a dedicated guerilla force. It was the first religious war. The pagans didn’t fight over religion. There were lots of gods. Worship any one you pleased. Antiochus’s decrees were unprecedented. Religious persecution and the martyrdom it inspires comes from this period. It’s an unhappy legacy that is still very much with us.

Describe the character of Jonathan, the Jewish boy in the story.

I’m so tired of the Woody Allen schlemiel persona: the nebbish as the model of Jewish manhood. It’s a relic of the ghetto mentality. Neither my father nor my uncles were anything like that. In creating Jonathan, I wanted to show a Jewish boy who was tough, brave, smart, and loyal—proud of his heritage but respectful and curious about others and glad to have someone like Jason as his best friend. I hope Jewish boys think about that example of manhood.

Jews and Greeks are not and were not enemies. They learned so much from each other. Talmudic reasoning—the importance of asking questions and considering different points of view—and the entire structure of Kabbalah and Jewish mysticism are based in Greek philosophy. Specifically, Plato’s Myth of the Cave that Jonathan discussses with his teacher. If Jews obtained the philosophical underpinnings for their religion from the Greeks, the Greeks obtained their ideas about religion from the Jews. After all, Christianity began as a Jewish sect that moved into the Greek world.

What’s your favorite scene in the book?

When Jonathan and Jason meet in the streets of Jerusalem as enemies trying to kill each other and suddenly discovering that they’re friends. Why are they here? Why are they doing this? A good question that could be asked about all the wars in history.

In the author note, you write that Hanukkah is your favorite holiday. Why?

Easy! Bright lights, a lovely family ritual, plenty of food, and presents. How could anyone not love Hanukkah? My fondest memory is of our old brass menorah and its two fierce lions facing in opposite directions above the candles. My grandma brought it over from Europe. It’s well over a century old by now. My brother has it. We used to love watching those old-fashioned orange candles melting down in big puddles of wax. We could play dreidel for hours. We played for keeps.

Tell us about your partnership with illustrator Dov Smiley.

Catriella Freedman, an outstanding editor with PJ Library connected me to Dov. We hit it off right away. It was as if we were old friends. I had written a story called "Jason and Jonathan" that was published in Cricket Magazine several years ago. Our first task was figuring out how to expand it into a full-length graphic novel. Dov and I exchanged ideas back and forth about the characters, the period, the setting. Gradually, in the course of these conversations, the story developed into its final form. This was a new experience for me; very different from creating a picture book. In picture books the author and artist usually have no connection or communication of any kind. I frequently don’t see the artwork until it’s almost completed. This was a different experience. Shield of the Maccabees was a collaboration from the beginning.

What are the connections between this story set 2,000 years ago and today's modern readers?

Peek behind the scenes of Shield of the Maccabees to learn how a graphic novel artist works.

Shield of the Maccabees is now available at Behrman House, Amazon, and local bookstores.

"A fun and clever twist on the story of the Maccabees."- Steve Sheinkin, author and illustrator of The Adventures of Rabbi Harvey 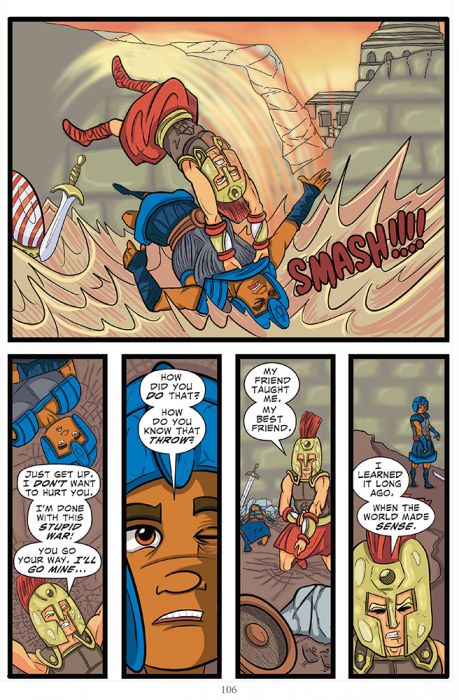 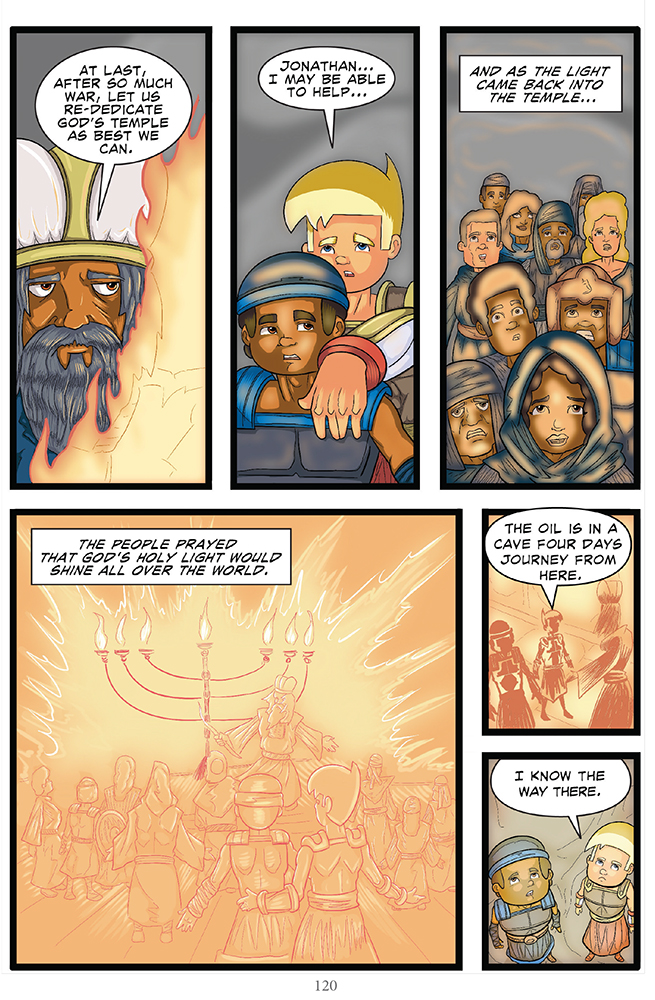