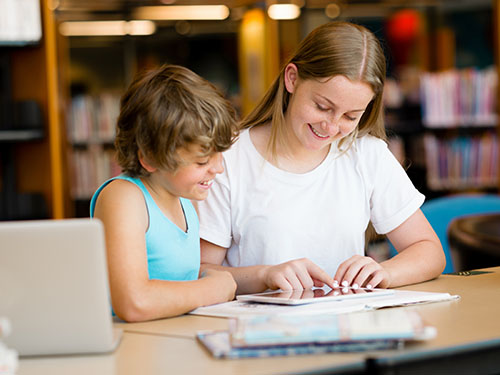 In-service training with the entire team of teachers. Finding a sub to fill in if you’re absent. Weekly staff meetings.  These are all familiar elements to most professional educators. Yet at Congregation M’Kor Shalom in Cherry Hill, New Jersey, these are also part of what all teen madrichim do each week.

Teens can offer invaluable help to teachers in many classroom settings. The term most often used for such teens is madrichim, which is “best translated as ‘guides,’” according to Lisa Bob Howard in The Madrichim Manual. “They guide younger students toward a positive religious school experience by demonstrating their involvement, their skills at collaboration, and their initiative.”

“They are our right hand. We respect them and in turn they have a sense of pride in their jobs,” she says.

The teens on the “Madrichim Team” at M’kor Shalom wear a uniform—a special T-shirt, with a different design every year—so they can be identified by parents or anyone else. Only those who work at the synagogue can wear it. It’s a small touch, perhaps, but emblematic of the way the school leaders view the teens.

“We want it to be known who these people are, so a parent sees a madrich and knows this teen is coming to work with their children,” says Adam Roth, who oversees the madrichim program and is also its special needs coordinator.  “We let them know that not only do we respect them but that we need them. We don’t want them to feel like we just need an extra hand.”

M’kor Shalom has about 200 students in its religious school, and 30 teen madrichim. All the madrichim work in a classroom environment unless they are needed for occasional individual tutoring.

On Sunday mornings, all teachers and madrichim attend an 8:30 a.m. staff meeting, half hour before school begins. “We do news and a d’var Torah, and the teachers have a quick meeting with their teen to let them know the day’s plan,” Vecchio says. “What’s really amazing is that sometimes we’ll have younger siblings of a teen at the staff meetings (so parents don’t have to dropoff twice), and a 4th grader might raise a hand to offer an idea during the d’var. We call them our junior madrichim. It’s all part of building a culture of something to aspire to.”

Madrichim are involved with every aspect of the class. That usually means working with small groups, whether on the alef bet, crafts, baking, or prep for a future lesson. They also attend all field trips and overnight Shabbatons. “They’re a part of our class, part of what we do,” Roth says.

Some madrichim also one-to-one with students who need closer attention. Those students have a confidential care plan, and their madrichim are involved so they can understand their student’s special needs. “Parents are totally on board because we’re all there to support the students,” Vecchio says.

Madrichim can choose to stay with the same teacher year to year, which builds a trusting relationship. “I’m also a teacher here, and if a teen has been with me for three years, they know me and know what to do,” Vecchio says. “Kids needs some ownership in the classroom. They’re helpers, but also part of the community. The teacher sets that tone. I consider my teenagers like my team members.”

Who is On the Madrichim Team

Almost every madrich has been at M’kor Shalom since preschool, so they have grown up there and anticipated joining the team since their youngest years.

Roth himself was a madrich at M’kor Shalom almost 20 years ago, and Vecchio’s oldest daughter was a madricha and is now a first-grade teacher at the school.

“Our secret sauce is our team,” Roth says. “The goal is to make Judaism accessible to all our students. One of our 12th graders was a student who’d had a one-to-one helper and it was a real open-door moment for them to grow up a bit and see the value that had made and in turn to provide it to another student.”

“It’s a privilege to be a madrich here and we feel like we’re presenting our teens a really awesome responsibility,” Roth says. To apply to be a madrich, teens must be enrolled in the school’s Hebrew High School, which begins in 7th grade.

“They wouldn’t be good role models if they’re not continuing their education. They can’t be part of our team otherwise,” Vecchio explains. “I say to my middle schoolers – you can be in my classroom in a few years. That’s really motivating to them.”

Also, only teens in grades 10-12 can be madrichim. “They’re just not ready before 10th grade for the commitment and responsibility.” They earn $10 an hour, the state’s minimum wage. “We could pay them less because we’re a non-profit, but frankly, they should be paid a proper wage for the commitment and work they do,” Roth says.

As with most teens, communications is an ongoing issue.

“For all the responsibility we give them, they are still teens and this is likely their first job,” Roth says. “We want to set them up for success.” Teens have had to learn to check email for school purposes, because “if someone is starting out, they need to know that’s how to communicate in a professional way,” Vecchio says.  She will also let the teens text as well, because the bigger point is about communications and being responsive.

Many of the madrichim are active in their BBYO chapter, and when there’s a regional event on a Saturday night or weekend, the staff gets wiped out. “Some weekends we’re short and we just make do,” Vecchio. “We are so proud of them and of our program. Knowing they come here they want to be here and to make that a commitment gives us so much pleasure.”